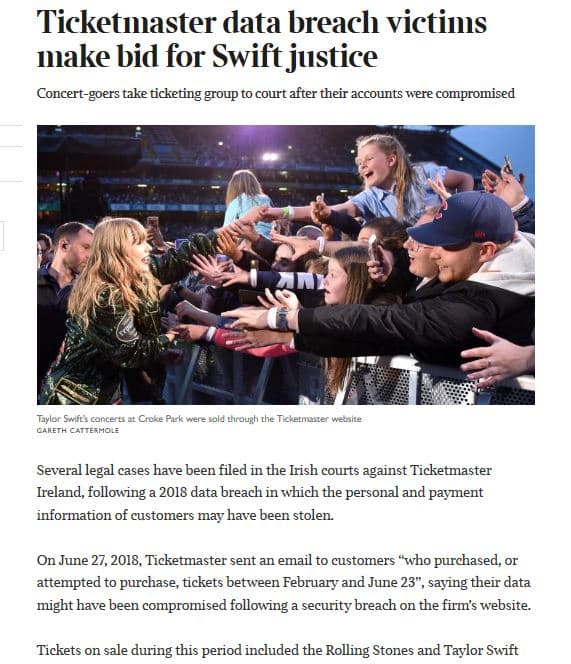 In June 2018, concert ticketing group Ticketmaster suffered a security data breach, potentially affecting anyone that bought a ticket on the site between February and June 2018. The breach occurred after the new data protection laws (GDPR) came into force, which means this could be a damaging event for the company.

Gibson & Associates are a leading firm with expertise in Data Protection cases and bringing these cases to court. The law firm was asked by The Sunday Times to comment on the Ticketmaster case:

“While we cannot comment on any specific case, we are acting for a number of individuals who are seeking compensation as a result of the [Ticketmaster] breach.”

“In relation to Ticketmaster, it would seem that if an individual has suffered either material or non-material loss as a result, then they are entitled to legal redress through compensation*,” said Daireann Gibson, principal of Gibson & Associates. “Non-material loss includes . . . the anxiety and stress caused as a result of the data breach.”

It is thought that customers’ payment details and other information such as emails and phone numbers have been compromised in the breach. Individuals that were affected in the breach were notified by email shortly after the incident.