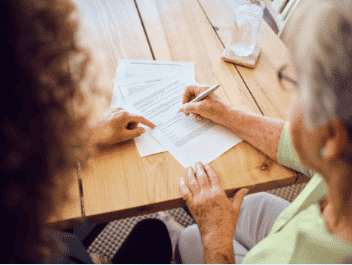 How to Contest a Will in Ireland

If you wish to contest a Will in Ireland, you need to begin legal proceedings in the High Court. First, however, you must be certain that you have sufficient grounds to challenge a Will.

Grounds for challenging a Will

Although you may be disappointed by the contents of a Will, this is not necessarily a cause for legal action. Lots of beneficiaries hope to receive a large inheritance, but if this does not materialise, you may have to grin and bear it.

Nevertheless, there are times when a Will can most certainly be challenged or ‘contested’. In Ireland, there are four main grounds for challenging a Will:

For a Will to be valid, it must be:

Lots of Wills fail to meet these requirements, particularly do-it-yourself Wills which have been made without the input of a solicitor.

Often, problems arise because the Will has not been executed properly. This means that the testator did not sign the document, either at all, or in front of two independent witnesses. Or, it could be that the witnesses failed to sign the document in front of the testator. These witnesses must be over the age of 18 and must not stand to benefit from the testator’s estate. This means they cannot be the testator’s spouse or child, be married to a beneficiary or be the child of a beneficiary. If a Will fails to meet these requirements, it must be set aside.

Furthermore, the testator must have been of ‘sound mind’ while writing their Will. This is also known as ‘testamentary capacity’. The legal test is that the testator:

If there is any suspicion that the testator was pressured into naming a beneficiary – or indeed pressured into disinheriting a certain beneficiary – then he/she has been put under undue influence. These claims often relate to testators who were frail, elderly or in some way vulnerable. Because of this, an individual was able to coerce them into writing a Will from which they benefitted.

When writing a Will, you are allowed to leave your assets to whomever you choose – with some exceptions.

Cohabiting partners may also make a claim for financial provision. This is permitted if you were in a relationship with the deceased and you lived together for five years, or for two years if you had a child together.

If a spouse, child or cohabiting partner is not properly provided for under the terms of the Will, a legal claim can be issued.

Finally, there is the concept of ‘proprietary estoppel’. This is when the Will fails to acknowledge prior agreements or promises to your detriment. These claims are especially prevalent amongst the farming community.

For example, the deceased may promise during his lifetime to leave the family farm to his nephew. Because of this guarantee, the nephew spends his life working on the family farm, rather than pursuing opportunities elsewhere. However, because of an argument shortly before the uncle’s death, he decides to change his Will, naming his niece as the sole beneficiary instead. The nephew would then have a claim for proprietary estoppel, on account of the fact that his relied on his uncle’s promise to his detriment.

Where a prior agreement is not met, the court may be persuaded to enforce the terms of the promise – either partly or wholly.

Step-by-step guide to contesting a Will

The process of contesting a Will differs from case to case, depending on the type of claim being brought and the extent of disagreement between family members. Typically, you need to:

Firstly, speak to a solicitor about contesting a Will. A solicitor can confirm whether you have a strong legal basis upon which to challenge a Will. This prevents you from pursuing a claim that will ultimately fail.

If you do have good reason to contest a Will, your solicitor can suggest the best way forward. It may be possible to negotiate a resolution directly with the personal representatives of the estate, and/or the other beneficiaries. Alternatively, mediation may prove useful.

Some claims must be made after a Grant of Probate has been issued, while others must be brought before. In the latter case, your solicitor can lodge a caveat at the Probate Office or the District Probate Registry. This prevents a Grant being issued, meaning the estate cannot be distributed until your claim has been resolved.

If the dispute cannot be resolved amicably, it is necessary to issue legal proceedings at the High Court. There will be a hearing, after which the judge will decide the outcome. If your claim is successful, the Will must either be set aside or an award issued from the estate.

What needs to be proven in order to contest a Will?

For your claim to succeed, you need to provide evidence in support of your case. The nature of this evidence will of course depend on the type of claim being pursued.

Sometimes, issues regarding the validity of a Will are obvious. For example, the deceased either signed the Will or they didn’t. Other times, you may need to track down the witnesses and ask for their account of events.

If you are suggesting that the deceased was of unsound mind, you will need to provide compelling medical evidence. Statements from other reliable witnesses may also be considered by the court. This includes the solicitor who helped the deceased draw up their Will and other relatives, friends, and care-givers. The courts will want to see that mental capacity had been lost by the testator, so much so that they did not realise what they were signing.

Claims relating to undue influence are often hard to prove, but it can be done. The courts will look at the circumstances of the case, including whether a previous Will named a beneficiary, only for that individual to be excluded in a replacement Will. If the main beneficiary was in close contact with the deceased during the execution of the Will, this will raise suspicion further.

Similarly, proprietary estoppel claims revolve around the circumstances of the case. You will need to prove that the deceased made a promise and that you wholeheartedly believed this promise would be upheld. The evidence will largely hinge upon the actions of you (as the claimant) and the deceased during their lifetime. For example, if the deceased asked you to work on the family farm for reduced wages, on account of the fact that you would one day inherit the farm, then you have both participated in a verbal agreement. This shows that a promise had been made and that you considered this to be binding.

For proper financial provision claims, the evidence required will depend on your relationship to the deceased. Claims brought by spouses will involve an objective calculation as to whether one half of the estate has been provided, or one-third of the estate if there are children.

For claims brought by cohabitees, the court will look at a variety of factors, including:

For claims brought by children of the deceased, the court will consider factors such as:

Therefore, both cohabitees and children must prove that proper financial provision has not been made, even though it should have been.

Time limits for contesting a Will

If you wish to contest a Will, you need to act quickly. There are strict time limits involved. The exact amount of time you have depends on the type of claim you are bringing.

Other claims are also subject to a time limit, so it is vital not to delay when seeking expert legal advice.

Can a Will be contested after Probate?

Other times, however, it is better to act before Probate is granted. This is particularly true of claims relating to an invalid Will or undue influence. In such instances, it is more practical to raise these queries quickly and lodge a caveat at the Probate Office. Otherwise, a Grant may be issued, allowing the executors to distribute the estate. If this happens, it is possible to make an application to the court, asking for the Grant to be revoked.

How can the Probate process be contested when there is no Will?

You may also want to bring a legal challenge, even though the deceased did not leave a Will. These claims arise because the deceased’s estate is set to be distributed according to the intestacy laws, yet you are not provided for under the Succession Act – even though you were dependent upon the deceased during his/her lifetime.

Such claims typically apply to cohabiting partners who are not automatically provided for under the intestacy rules. If so, you have six months to bring a claim, starting from the date the Grant of Administration is issued.

If you contest a Will or challenge the intestacy laws, it is up to you to prove your case. It is therefore vital that you get expert legal advice. Otherwise, your claim may fail, meaning you could be liable for the costs. But so long as your claim is reasonable and conducted in a bona fide manner, the court may order that the costs be paid out of the estate.

If you want to challenge a Will, please contact us at Gibsons & Associates. We can advise whether you have grounds to contest the Will. If so, we can guide you through the process, working to ensure you receive your rightful inheritance. There are strict time limits involved, so please do not delay in seeking our professional legal advice.

1. What Does It Mean If A Company Files for Insolvency?